Hi, I'm Iain, a dad from Dorset. I'm a software developer who works from home. My son is two and a half and this is where I'll write about things we do. Thanks for stopping by. 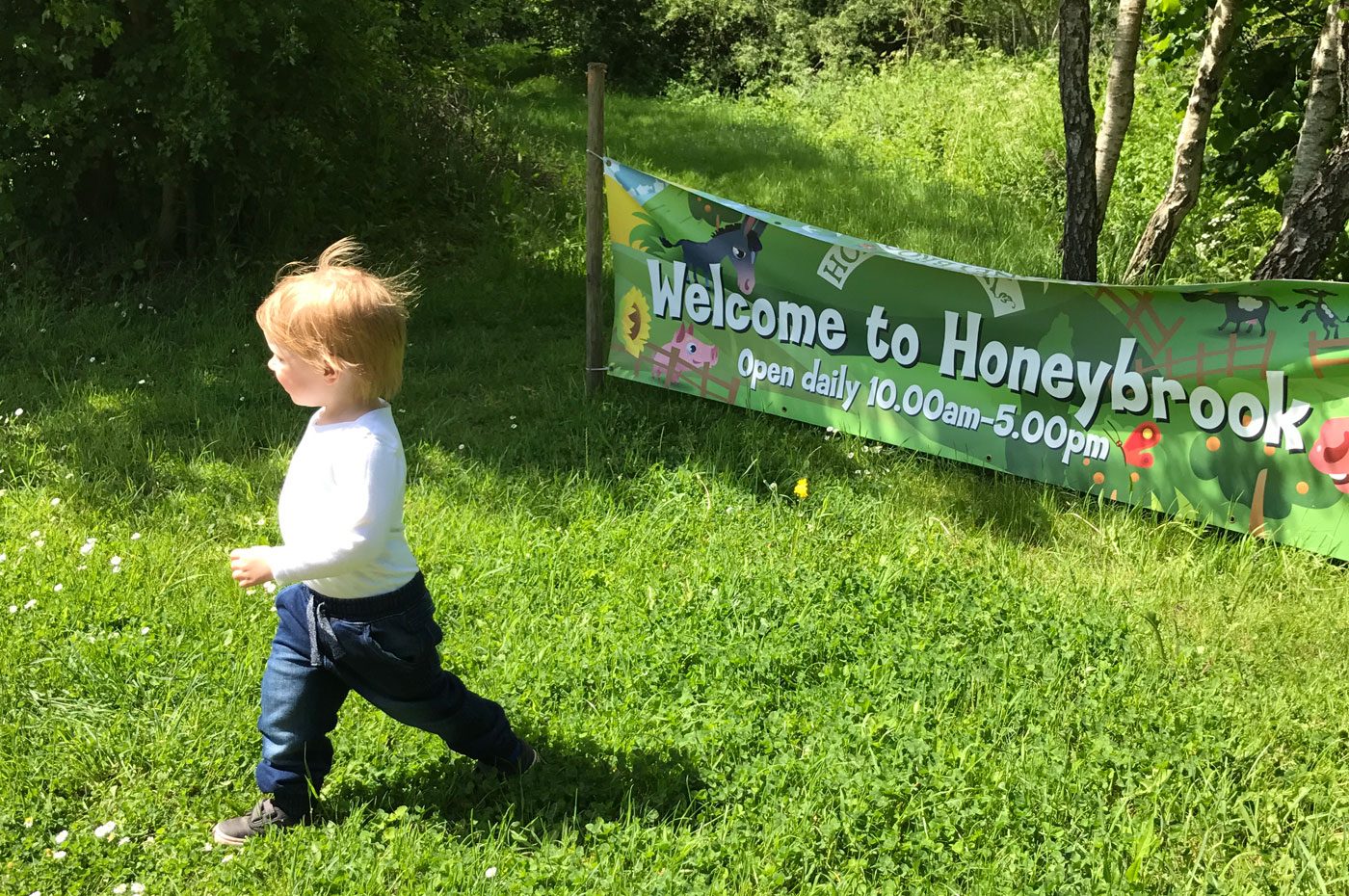 Last Saturday Michelle tasked me with finding an activity for us all to do the next day. I solve most of my problems at work by Googling, so this was no different. Google took me to Dorset Mums who has a really helpful list of things to do all over Dorset, and from there I found Honeybrook Farm near Wimborne.

We turned up just before 10am (opening time) expecting a hoard of people. The walk from the car park to the entrance next to the farm shop is enchanting. You walk along a stream, past the rear of the toddler play park with all the play houses, through the gardens of the farm house, and finally into the shop. It was pleasantly quiet when we got in, with a few children waiting for a birthday party to start.

The farm opens on a Tuesday and all weekend during term times, and all week during holidays. It was £7 each for us adults and £3.50 for Rex as he is over 2. Before I had time to consider if this was expensive or not, the lady gave us each a ticket for a train and tractor ride. I mean, who doesn’t want a tractor ride?!

After checking out the order of play for the day, we realised we had some time before the first activity, so we headed off in the direction of the train, with a quick detour when Rex spotted the huge trampoline pillow. A few bounces later we had found the train and were waiting for it to arrive.

The train ride itself was pretty basic, just reversing down a straight track and back again. (Not as extensive as Moors Valley.) But we passed some animals and for a toddler it was pretty exciting. We then set about exploring the many animals in a set of barns. Rex managed to see small and large pigs, geese and some hens. As well as some donkeys nearby in a field. And then he spotted the soft play barn. How do kids do it? They can spot these places from a mile off! However, it was the first soft play I actually liked! First off we were the only ones in the barn, which had a large area with play kitchens and toys, as well as a soft play area in the corner. Secondly, the area was relatively small and not too high. Rex could enjoy it without risking life or limb, and I could watch without fear of a heart attack!

We managed the quickly exit the barn without tears once we heard the tractor pull up outside ready for the next ride. The ride itself was fun and bumpy, riding in a cart pulled by the tractor, looking at animals along the way. When the tractor dropped us off we were all ready for lunch. Although the restaurants wall mounted menu chalkboards took some navigating to understand, the food turned out to be really tasty. Both Michelle and I had perhaps one of the best burgers I’ve had in a while, packed with salad, and Rex made a good dent in a rather large jacket potato.

After lunch we were in time to take part in feeding the youngest of the lambs. Rex got to hold the bottle briefly as it was passed around 6 children in double quick speed as the lamb proved to be very thirsty! He also made friends with a giant rabbit called Koala and really enjoyed stroking both animals. The last thing to do was to explore the play parks. We opted for the smaller sized park which had a wooden train and some proper wooden play houses. Rex particularly enjoyed climbing up the mini stairs to the first floor of one.

Overall our trip to Honeybrook Farm was well worth it and I can see us going back again. There was lots to see and do – great fun for all ages.

Fill out your email address below to be the first to hear of new posts.

About the author Iain

Hi, I'm Iain, a dad from Dorset. I'm a software developer who works from home.

All posts by Iain →